EnviroZyme® conducted a summer pond trial in Northern California in order to study organic reduction and water clarification resulting from treatment with bacteria, specifically with our Biological Pond Treatment product. The 75-acre pond—located outside of the river club for community residents—had been experiencing high organic levels that seemed to be increasing each year. 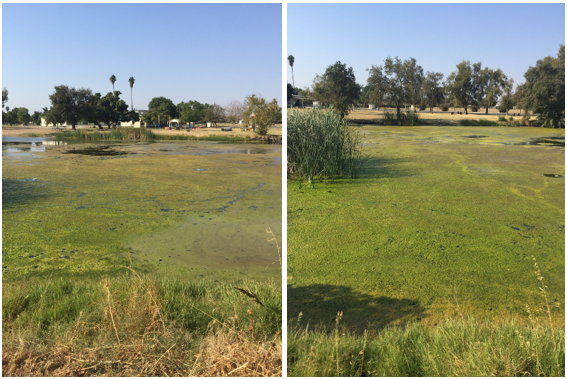 In addition to the visible algae growth on the surface of the water, the pond used in the trial also had significant sludge beneath the surface. Sludge is an accumulation of organic matter that settles at the bottom of a pond or other body of water. This organic matter can include decaying plant debris, fish waste, and debris from outside washed in by rainwater, but the largest contributor to accelerated accrual of sludge is dead algae. In fact, a different pond in this same community became so overwrought with algae and resultant sludge buildup that it had to be dredged a few years prior to our trial, costing the community around $90,000.

In our 8-week trial, quarter-pound water-soluble pouches containing spray dried, dormant bacteria were tossed from the bank of the pond into the water. On day 1 of the trial, a 150-pound shock dosage was delivered, followed by a two-week no-dose period. During weeks 4–7, a 100-pound weekly dosage was delivered, and on week 8, a 50-pound dosage. In general, dosage will depend on factors unique to each body of water, including the depth, length, width, and severity of organic levels. EnviroZyme representatives are available for consultation when determining individual dosage rates.

The water-soluble pouches began to break down and release bacteria in just a matter of seconds, at which time the nutrients in the pond activated the metabolism of the bacteria, causing them to become vegetative. Contrary to its connotation in the medical field, a “vegetative” state in biology is an active state in which the bacteria are producing enzymes, consuming organic material, and reproducing. 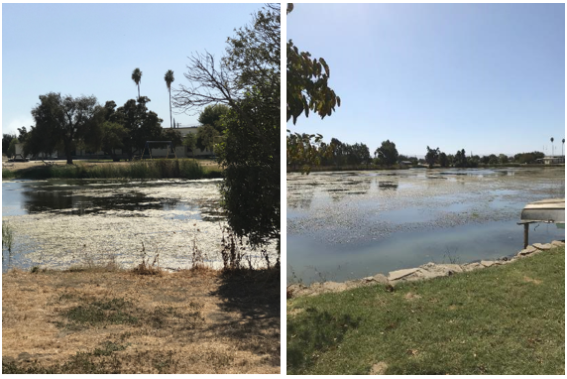 After 4 weeks of treatment

The bacteria contained in the pouches and their offspring secreted targeted enzymes to break down the types of organic matter contained in the sludge in the lower layer into a digestible state, before proceeding to ingest and digest it. The specific strains of bacteria contained in the Biological Pond Treatment, as well as the specific strains in all of EnviroZyme’s products, are selected deliberately with consideration to the specific enzymes they produce and the intended application. This process of utilizing bacteria to remove compounds—including plant-based cellulose—that become detrimental when allowed to accumulate is otherwise known as biological remediation. 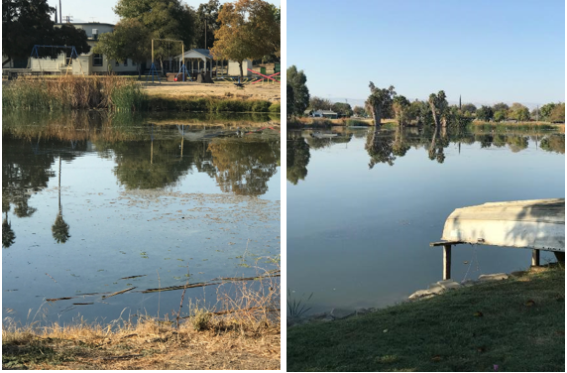 After 8 weeks of treatment .

As the bacteria consumed the organic matter contained in the excess sludge, that layer was gradually reduced to acceptable and expected levels, leading to a reduction of the unpleasant odors associated with decaying organic material, too. As the bacteria consumed the organic nutrients that also fed the algae, the algae were starved through competitive exclusion.

As one can see based on the photos above, after just 8 weeks of treatment, surface algae had almost completely disappeared and the overall water clarity was much improved. Overall organic levels of the pond, including sludge, had been dramatically reduced. Residents commented that the water quality is the best they could remember seeing in many years, and they were very enthusiastic to treat the remaining ponds around their river club.

Are you interested in achieving similar results for your pond or other body of water? Contact us today by filling out the form here or call 1-800-232-2847 to speak with a representative.