Enzymes vs. Bacteria, Unmuddying the Waters 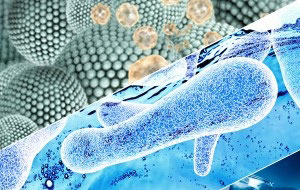 Appropriately, the substances on which enzymes act are called “substrates,” and the molecules produced as a result are called “products.” Which substrate an enzyme acts on is dependent upon the unique three-dimensional shape of each enzyme.

Enzymes are not living organisms, but they are produced by cells in living organisms in order to help convert food to energy, build compounds, or remove wastes quickly enough to sustain life.

Bacteria are one-celled organisms that require food (and the vitamins therein), oxygen, water, and appropriate temperatures in order to survive, just like humans. Different bacterial strains will produce different amounts and types of enzymes in order to speed up the break down of complex substrates, and then consume the smaller, simpler products as food.

If bacteria did not create enzymes, complex substrates would take too long to disintegrate into consumable products, and the bacteria would not be able to eat enough in a short enough period of time to survive and reproduce.

The complex substrates that enzymes act on and bacteria then consume include waste compounds that pollute the environment, such as those listed in the table above. Even substrates that sound relatively harmless, like starch, can and do wreak havoc on the planet and its inhabitants.

Biological remediation is a process through which safe bacteria are selected for the enzymes they produce and are purposefully introduced in a given location in order to remove a specific harmful waste. During this process, bacteria and enzymes work hand-in-hand, and the byproducts of digestion are more bacteria, water, and carbon dioxide, which are natural and inherently harmless. The bacteria continue to reproduce until the bacteria’s food is eliminated. 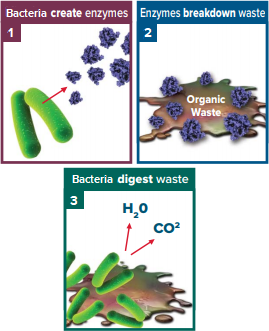 EnviroZyme is proud to pave the way to a more sustainable future by providing products that facilitate biological remediation. In addition to more than 20 off-the-shelf bacterial strains, we are also able to custom ferment bacterial strains to suit individual waste-elimination needs.